This Little Light of Mine

We all know this folk song based on Matthew 5,

14“You are the light of the world… 15No one after lighting a lamp puts it under the bushel basket, but on the lampstand, and it gives light to all in the house. 16In the same way, let your light shine before others, so that they may see your good works and give glory to your Father in heaven.

Many of us sang it in Sunday school with finger motions

This song was also popular in the civil right movement, used most notably by Mississippi voting rights activist

Mrs. Hamer was an unlikely leader.

She was born into a sharecropping family in Sunflower County, Mississippi,

and was the youngest of a family of 20.

She had to drop out of school at the 6th grade to support the family,

She saw the conditions of the workers, how they were overworked and underpaid,

so tired at the end of the day that there wasn’t any fight left in them.

She saw the way the black sharecroppers pretended to be satisfied with their lot, smiling at the white owner,

but turning to hateful or hopeless words once they were gone.

Then in 1964, Mrs. Hamer heard a speaker say that Blacks had the right to vote, and that they should register.

“Just listenin’ at em, I could see myself votin’ people outta office that I knowed was wrong

and didn’t do nothin’ to help the poor. And I made up my mind that was something I wanted to be involved in.”

Mrs. Hamer was the first to sign up to register.

At the court house, she was given a section of the Mississippi state constitution on de facto laws,

and asked to interpret it.

She flunked the test.

But she studied up on the constitution and passed it the second time.

Then came the harassment.

She was kicked off the plantation, losing her job, and her family threatened.

Cars would roll by real slow in the middle of the night, guns pointed at the house.

Mrs. Hamer nonetheless continued to do what she believed was right, and became a field organizer

travelling all over the state of Mississippi, mentored hundreds young people in the movement.

at the US Democratic Convention.

The Mississippi delegation was all white, despite the hundreds of thousands of Black Mississippians

and thousands of Black registered voters.

by demanding an integrated delegation at the convention.

When the white delegation refused to offer any seats to the Freedom Party,

they took their cause to the chairman and broadcast Mrs. Hamer’s speech on live TV.

but she gripped the nation with her conviction, her example, and her speech,

and her light shined out to the world.

Fannie Lou Hamer is a modern example of how God lifts up leaders to shine well beyond their boundaries.

That’s what the prophet Isaiah from our OT lesson was talking about.

It’s one of the ‘servant songs’ in the book—

passages about the faithful servant that God was raising up for the people.

The servant’s job was to call the people back to God;

but the road wasn’t easy, and the people didn’t always listen.

Despite the difficultly of this job, God lifted up this servant to an even loftier job

before the first job was done: to be a light to the nations.

The servant was to bring in not only the people of Israel, but all the peoples of the earth.

We hear the frustration in the servant’s voice in our lesson today:

“I have labored in vain/ I have spent my strength for nothing and vanity.”

The demoralized people in exile couldn’t hear the servant’s words of hope.

Anyone who has fought a losing battle and wondered, why do I waste my breath?

can identify with this sentiment.

Why try if nothing will change?

But the servant didn’t get lost in futility; instead the servant continued to trust in God saying,

“yet surely my cause is with the Lord and my reward with my God.”

And this is point that I think is worth dwelling on: being a servant of God includes hard times and difficult work

but trusting in God’s goodness and God’s ultimate care is what keeps people going.

Fanny Lou Hamer was once beaten so badly in jail that it took over a month to recover.

She suffered set backs—the blacks weren’t seated at the 1964 convention.

Her song, This Little Light of Mine, was an affirmation of her core belief

that there was light within each person and that it was meant to shine.

It strengthened her and others in the struggle.

It was a song of trust that if God wanted that light to shine, eventually it would.

It’s a good song to sing in uncertain times.

Whether it’s personal uncertainty about job, relationship or health

no matter the challenge or hardship, God is present in the midst of the struggle

it is God’s presence that shines through.

It may not have been evident to many of you, but my years here at Our Savior’s

were personally some of the most difficult in my life.

The difficulty had nothing to do with you or this church—

I don’t need to share the specifics of what was going on for me,

but I do want to share that it was your light that helped me through some of my darkest days.

Your light was not something you had to put on or try hard at;

whether it was 30 people raking leaves or 10 people painting

your light has shined, and it has encouraged and inspired me over and over.

I have come to understand that times of struggle have their spiritual merits.

These unbidden times of testing have offered me the opportunity to see God’s faithfulness in a new way,

Ultimately the hard times have renewed my trust in God,

because I have experienced my own limitations, and leaned on God out of necessity,

teaching me the posture of trust that has become more and more my way of being.

When Fannie Lou Hamer sang “This Little Light of Mine” thousands of people joined in.

And suddenly it wasn’t one little light shining—

it was the blaze of the civil rights movement that set the world on fire.

That’s what happened for me too, when you let your light shine these last six years.

I thank God for the light in you.

Let your light shine, shine together, knowing that God shines through this church

to touch the world with warmth, hope, and love.

God has a secret weapon, our OT lesson talks about it today. Do you know what it is?

a polished arrow- to hit its mark

these weapons aren’t secret, they are what you might expect.

the secret weapon is light—

how is light different from these weapons?(light attracts, light gives life, light shows the way)

What’s your light? What in your life shows the way to others, or gives life?

(give out glow sticks)

Reminder of God’s light in you that you are to share. 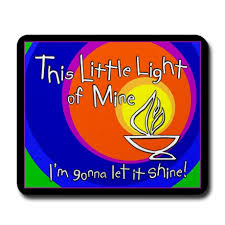 The difference between being grateful and saying thank you

Jesus and Peter: Forgiveness after Betrayal

Singing in the Midst of the Unspeakable

Was Jesus a foodie?

Blessed are those who mourn

This Little Light of Mine

Antietam, Isaiah and the hope for a better world

The Gene Pool is Real